Valletta, the smallest capital of the European Union, is now Malta’s major commercial centre and is visited daily by throngs of tourists eager to experience the city’s rich history.

Valletta’s streets and piazzas contain architecture ranging from early 16th century Baroque to Modernism. The city serves as the island’s principal cultural centre and its unique collection of churches, palaces and museums attract visitors from around the world.

When Benjamin Disraeli, future British Prime Minister, visited the city in 1830, he described it as

„A city of palaces built by gentlemen for gentlemen“

and remarked that “Valletta equals in its noble architecture, if it does not excel, any capital in Europe,” and in other letters called it

„comparable to Venice and Cádiz“. 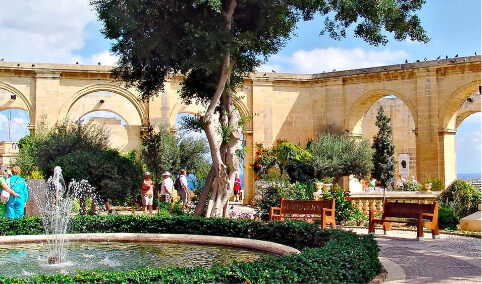 The Upper Barrakka Gardens is a public garden in Valletta, Malta. It offers a panoramic view of the Grand Harbour. <...

The Upper Barrakka Gardens is a public garden in Valletta, Malta. It offers a panoramic view of the Grand Harbour.

One of Valletta’s most beautiful parks, it was created in 1775 on the bastion of St. Peter and Paul. In the park there are several statues, including one from Sir Winston Churchill, and a sculpture by the Maltese sculptor Antonio Sciortino, entitled “The street boys.”

read more
We use cookies to ensure that we give you the best experience on our website. If you continue to use this site we will assume that you are happy with it.OkPrivacy policy